It’s hard to leave a place like the forests of So-Duc, but we wean ourselves away with a morning trip up higher into the forest before we leave, and console ourselves with hopes of more great things to come.  It rained all night, maybe an inch or more, but it was a steady, sleep inducing rain; and we were warm and dry in the rooftop tent.  Both of us slept 10 hours,  I don’t remember ever sleeping 10 hours. This morning, we had coffee and breakfast, closed up shop and headed up the hill for another walk in this magical forest. 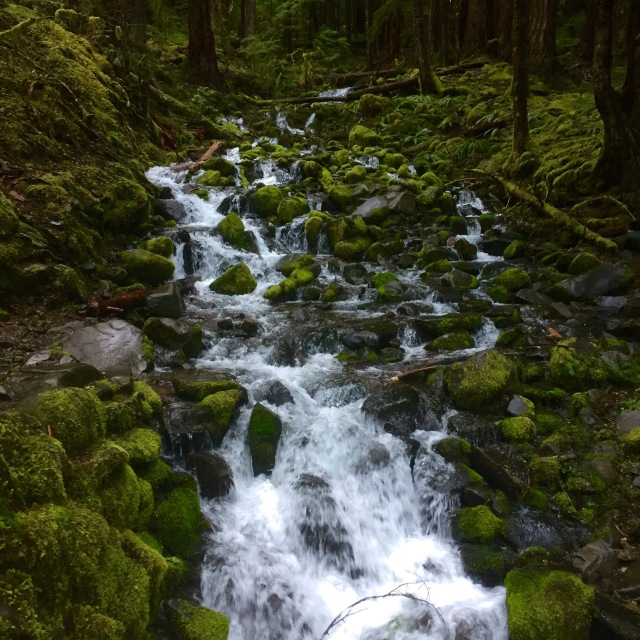 About a mile into the hike we found the falls we were looking for and spent a moment enjoying a brief period of sunshine that leaked between the dense vegetation. Then we said thanks, and headed back for the trip to the coastal zone of Olympic.

The rain, as it turns out, was just getting warmed up.  By the time we were turning around the northern edge of the park, it was pouring.  This would last unti dinner, only giving way long enough for a great sunset.  The plan had been a day on the beach exploring, walking down to several of the creeks that find the ocean here and maybe scaring up a salmon or two.  Instead, we sat together reading in the car, perched on a campsite right at the edge of the ocean.  Periodically we would get a break in the rain and stare at the gray sea. I grew enamored with a group of tiny sea ducks that fins something worth their time in the area of the water right where the waves break.  They land, dive for whatever it is, bob around ducking under the breakers, and dive again.  Like so many schoolchildren in the waves on Spring Break. I was watching them through the binoculars when right in the middle of the a mustachioed fellow popped up, rolled over and went to work on something on his stomach.  I’d seen a sea otter.  Say what you will about plans and weather, but an afternoon with your son reading good books and chatting by the sea, punctuated by seeing a sea otter in the wild is a good day indeed.

If the forecast is to be believed, the rain will cease tonight around 9 and the morning is supposed to be perfect.  Hopefully we will have some beach time before heading further down the coast and east into the rain forest.  At this point, I’m like those folks I mentioned earlier int he log — I’m going to be wet, so it doesn’t really matter.  Every aspect of this park is proving to be worth the discomfort.  I will go to shorelines again, and I will see more pretty beaches, but this is the longest stretch of undeveloped seacoast in the the lower 48 states.  And it is remarkable.  “Jordan” is still in the game and he’s putting up big numbers.

#shrimp #lowcountry #picpouldepinet #birthday #family #lakemartin #lakemartinmag #holemanandfinch #bread #happy #loveallserveall #fiftyfive #wine
What a #birthday #haul of #bourbon ! Thanks to @leonalew @edentonetc @ernestedenton and, I suspect, @foreatlanta for finding and giving me these fabulous #bottles #lucky #lake #fiftyfive #family #rockhillfarms #peerlessbourbon @buffalotrace @kentuckypeerless
Last day before the #doublenickel so why not? @blantons_bourbon ha s always been my #favourite #bourbon #whiskey and despite many other great ones, it has a #special place. #happy #lucky #lake #lakemartin #speedlimit tomorrow.
The annual gathering of #generals has begun. God help us all. #wandl #washingtonandlee #phidelt #bourbon #whiskey #barrelproof #elijahcraig #drinks #friends #lake #lakemartin @elijahcraig
32nd #anniversary nights don’t come around that often and neither does this #bourbon (at least for me). @heavenhilldistillery #oldfitzgerald #14 #bonded #whiskey is a worthy pour to celebrate an #amazing #woman Cheers to @leonalew for putting up with me.
#32years #love
I was setting up the second #shot (swipe) when a #honeybee decided he wanted in on it (zoom in on the first one) that’s how good @districtmagnus #murrayhillclubbourbon is! #whiskey #bees #garden #summerrain #bourbon #drinks #velvethour #goodwhiskey #lucky #thanks @leonalew
@lake_martin_ #memorialdayweekend #fishfry #stripers #unclejohnssecretrecipe #highlife #somegaveall #thankful #family #circleofseven swipe to see @leonalew rockin the #hushpuppies @millerhighlife @yeti
Start (swipe) finish. #pork #porkbutt #smoke #slowcook #food #pig
%d bloggers like this: