After picking up Foster in San Antonio late Friday, we drove west through one of Texas’ famous storms with quarter sized hail forcing us off the road for a bit to wait it out. I’d have probably kept on going if I was alone, but your perspective changes when your son is with you. We eventually made it to Ozona, TX, got a good night’s sleep and were on our way early to Big Bend. To get to the park, you basically get to Fort Stockton, TX and take the only road south. The only thing meaningful along that route is Marathon, TX and its only meaning is that it is on the way – and that it was the last place to get a rail car back in the day.

Between Ozona and Marathon we noticed a berm running along parallel to the road on our western side. Even and true, it kept pace until we began to realize the regular short wooden posts – maybe 10 or 12 feet – marching along with it and the wooden brackets at the top of the posts. We were following the old rail line – the berm was the rail bed, overgrown but un-moved, still as straight and true as the road boss could make the gangs build it. And right there by its side were the telegraph poles, once critical carriers of a wire that could save lives, order meat and call the Calvary with the dots and dashes of a steady handed operator. Periodically, a hank of rusty wire spooled down from one of the brackets, rocking gently in the wind, no longer needed but stubbornly proud of the job it once did.

Thirty-nine miles south of Marathon, and the end of the rail line, is The entrance to Big Bend National Park. Big Bend is very very big. At over 800,000 acres and 1,250 square miles it looks, on the map, like green shaded area in the bend of the Rio Grande forming the western edge of Texas’ iconic tail. What doesn’t show on the map, are the three distinct places its size gives it the ability to contain – mountain, desert and riverine. For over landers like us, Big Bend offers a ready selection of 4wd only roads providing access to these areas and, given the immense size of the park, these roads become journeys in and of themselves.

We had to register and get permits for the various back country camps along the 4wd roads, and we had to pick our sites when we registered. Fortunately we had researched the sites ahead of time and knew where we wanted to stay. Every one of our first choice sites were available – unheard of in my experience in the parks, but our first little moment of joy. We chose a mountain site one night, a high desert sight for the second night, and will finish off along the banks of the Rio Grande in a sight on a bluff overlooking the river that is actually south of Mexico (because of the bend in the river).

We first headed into Chisos Basin for a visit, then took the Glen Springs 4wd road to the most remote site – Twisted Shoe – where we would be looking back at the south rim of the basin. The South Rim, Toll Mountain, Casa Grande Peak, and Crown Mountain make up the back side of the basin with Casa Grande rising to almost 8,000 feet. At their base on the south side is a Spring called Glenn Spring and about a mile or so further south from that is our camp.

Glenn Spring was once the water source for a community, founded by a homesteader named Glenn, who was murdered; and then led by a couple of entrepreneurs who built a factory in 1916, hired laborers from Mexico, filled vats with boiling sulfuric acid and cooked the native Candelilla plant to make wax. They used water from Glenn Spring in the process. After growing to over 80 people, bandits crossed the border, robbed the factory, killed most of the community and burned the place to the ground. Not, fortunately the place where we are camping, which would make sleep a tad restless, but such was life here on the edge.

Death and wax making notwithstanding, Twisted Shoe is a spectacular campsite. The views are as we hoped, perhaps better; the site itself is surrounded with high desert plant life and includes a huge boulder, and is not within miles of another person. Getting to Twisted Shoe is a twisted chore to say the least. While the road doesn’t present challenges that a capable 4wd can’t handle, it is very rocky, both with loose and fixed stone, so it is very slow. 5 mph is a lucky average. So the 13 mile drive from the main road across the desert staring at the south rim of the basin, anticipating, is a bit tedious. Once you are here all is good. Sitting under the awning with a bourbon as the sun sets behind Casa Grande and the South Rim, and your college age son at your side is joy on the edge indeed. 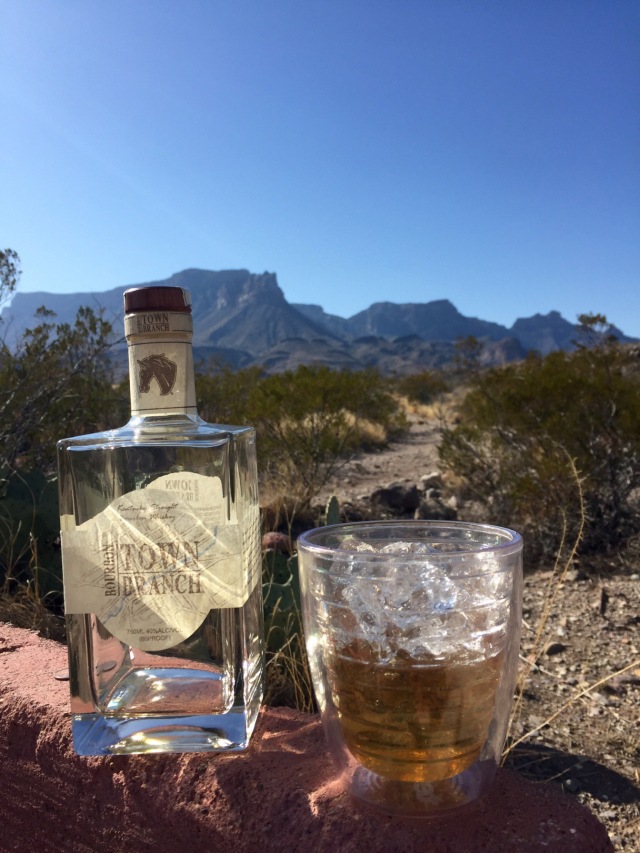 It’s 35 degrees with a steady 5-10 mph NE breeze, which in this air is damn cold. We do what you do, put on coats and hats and have a nice backpacker meal and enjoy the peace, the beauty and the absolute, total, wax-maker-dead silence. No phone, no people, no noise other than that which was already here long before we arrived. Then we climb up top to read a while before the star show begins.

I’ve mentioned this before about these remote places, but those of us who have spent our entire lives in or around any sort of municipal area just have no idea what the night sky looks like. Even the smallest amount of light pollution a spoils things. But out here, in the Chisos Mountains at 5,000 feet with thin air and no light we see the night sky. Colors, galaxies, planets, and all manner of hovering satellite show up as if drawn on the lenses of our eyes. The excitement at seeing Jupiter with the naked eye – the genuine thrill – gives us hope yet that a nation of reality show-addicted-instant gratification-how do you like me now narcissists will find its place yet. There is hope. As long as there is this night sky to put us in our place and awe us with its unending glory, there is hope.

And that is a source of great joy for this traveling tandem out on the edge.