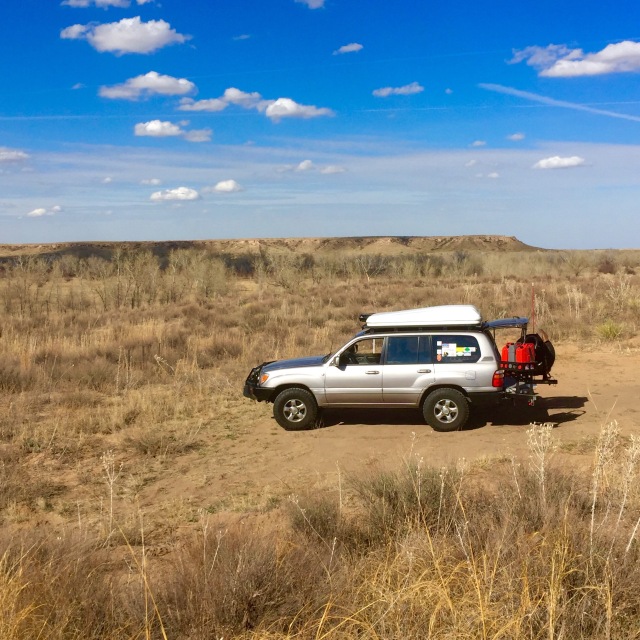 In the early 1820s, travelers headed west would often find themselves on the Santa Fe Trail as a means to get there.  From Missouri, across Kansas, Colorado and into New Mexico.  The trail crossed the great grassland prairies before rising into the mountains of northern New Mexico.  Today, I started my journey the same way — Missouri, into Kansas along much of the same route.  The old travelers were on the edge of something remarkable and life changing.  I think I am too.

Around 10 o’clock last night after a very nice first day, the sky lit up and put on a lightening show non-stop for six hours.  I lulled to sleep to the sound of the rain and the distant thunder and roused periodically to the bright flashes, and I don’t remember ever worrying about anything. It was, if there is such a thing, as peaceful a thunderstorm as you could imagine. This morning, rain still falling, I got the camp buttoned up and headed west into Kansas wondering why I didn’t worry.  And then wondering why I was wondering about not worrying. I was headed for the Cimarron National Grassland, a place I’d never been and I decided that I must have just replaced worry with wonder.

The Cimarron National Grassland is one of 20 National Grasslands administered by the Forest Service and is over 108,000 acres of land in total.  The Santa Fe Trail runs for 23 miles of its length through the middle of Cimarron as does the Cimarron River, more on which later.  Rather than finding rolling fields of tall prairie grasses, I found rolling hills of, well, I don’t really what.  There is cactus, sage, certainly some grasses, and the low areas are dotted with cottonwood trees. And there is horizon to horizon a constancy of rhythm to it that it takes your breath away.  The idea that one lone point of rock was so important as a navigation point is testament to the sameness of it all.  Called, appropriately, Point of Rocks, it was a point from which one could see other travelers in the distance, or by which one could navigate along the trail.  Everything else, everything, is the same.  Through this all runs the Cimarron River, though “through” is not the right word.  Under is the right word.  If you look on a map you will see the Cimarron River.  If you come here to it, you will not.  It runs under the grasslands.  As a result, you can only identify it by the cottonwood trees along the shallow depression where one presumes it sometimes rises to make an appearance. 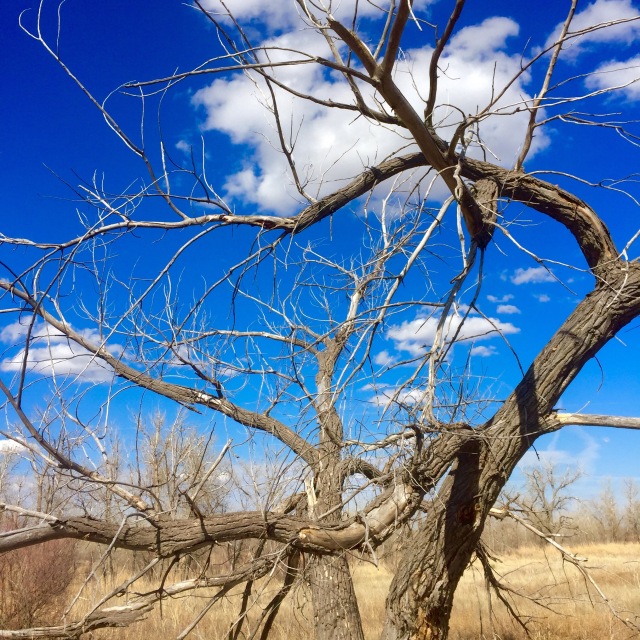 Amidst all this vastness, I find a campsite along the Bank of the not a river and within hours am surrounded by yipping coyotes, various raptors and Merriam turkey.  This is before the stars show up.  When that happens the whole notion of vast takes on a new meaning.  With no light pollution, crisp dry air, and nothing taller than your waist (Point of Rocks not withstanding), the night sky is a pallet of which only the Creator was worthy.  Mercury, Mars, star clusters, all the old favorite constellations explode in clarity and depth only possible when you get this far away from everything.  And somehow they mean more here.  They have a permanence and stewardship to and of this space, watchmen of travelers through this vastness, stenographers of a history that we only print in pages.

I’m not on the edge yet, but for many travelers in the past, this day’s journey was an edge.  They were leaping off.  Pressing on.  Going forward into what they knew not.  And these stars, and this grassland saw them on their way.  As they are each doing with me.  Much to my delight.

#shrimp #lowcountry #picpouldepinet #birthday #family #lakemartin #lakemartinmag #holemanandfinch #bread #happy #loveallserveall #fiftyfive #wine
What a #birthday #haul of #bourbon ! Thanks to @leonalew @edentonetc @ernestedenton and, I suspect, @foreatlanta for finding and giving me these fabulous #bottles #lucky #lake #fiftyfive #family #rockhillfarms #peerlessbourbon @buffalotrace @kentuckypeerless
Last day before the #doublenickel so why not? @blantons_bourbon ha s always been my #favourite #bourbon #whiskey and despite many other great ones, it has a #special place. #happy #lucky #lake #lakemartin #speedlimit tomorrow.
The annual gathering of #generals has begun. God help us all. #wandl #washingtonandlee #phidelt #bourbon #whiskey #barrelproof #elijahcraig #drinks #friends #lake #lakemartin @elijahcraig
32nd #anniversary nights don’t come around that often and neither does this #bourbon (at least for me). @heavenhilldistillery #oldfitzgerald #14 #bonded #whiskey is a worthy pour to celebrate an #amazing #woman Cheers to @leonalew for putting up with me.
#32years #love
I was setting up the second #shot (swipe) when a #honeybee decided he wanted in on it (zoom in on the first one) that’s how good @districtmagnus #murrayhillclubbourbon is! #whiskey #bees #garden #summerrain #bourbon #drinks #velvethour #goodwhiskey #lucky #thanks @leonalew
@lake_martin_ #memorialdayweekend #fishfry #stripers #unclejohnssecretrecipe #highlife #somegaveall #thankful #family #circleofseven swipe to see @leonalew rockin the #hushpuppies @millerhighlife @yeti
Start (swipe) finish. #pork #porkbutt #smoke #slowcook #food #pig
%d bloggers like this: