The salt marshes of Assateague Island

I woke up in the middle of the night remembering a ferry ride somewhere early on in the edge trek — must have been the Texas coast somewhere — when I was called back from boarding because I had gas cans on the bumper. My plan today was the Cape May-Lewes Ferry and I have two 5 gallon Jerry cans on the bumper. So, I started checking on the Ferry rules and discovered I had been foiled by The Man. Each car on the Cape May Ferry can have one gas can, empty or full, totaling no more than something like 6 gallons. Unless that car is pulling a boat. The boat can have two gas cans, empty or full, with the same amount of gas. So if you are pulling a boat you can have three gas cans. But if you aren’t pulling a boat you can only have one gas can. There’s a 50/50 chance I could have just slipped on, but basically to be safe, I could buy a boat, give up one gas can (I love my metal Jerry can), or find another route. I chose the latter. In the end it was shorter time-wise, but I was looking forward to the boat ride. I did it once before with my son and it’s a nice ride.

Instead, I plotted another route down through New Jersey, across the Delaware River, along the Delaware coastline to Maryland and over into Virginia just south of Pocomoke City. I traversed the eastern side of the DelMarVa peninsula. If you look at the map, from Philadelphia south, there is what looks like a hand hanging down — its wrist is at Wilmington, DE, its closed fist is due east of Washington, DC, and its long index finger is pointing at, or trying to touch Norfolk. This is the DelMarVA peninsula. It also happens to be the entire state of Delaware essentially, but they long ago figured out how to stay quiet and make all the money. They are probably satisfied that it isn’t the MarDelVa or the VaDelMar peninsula.

I said it yesterday, I think, but New Jersey is a very nice state. Once south of about Elizabeth, I found the entire central part of the state and southern part of the state to be delightful. Beautiful mixed hardwood forests, clean agricultural communities, Christmas Tree farms. Certainly there were areas of transportation warehouses and other industry clustered near strategic points, but the state is nice. Same with Delaware. Once out of the neck at the Delaware River, the state is lovely, with good — if expensive — roads and nice communities. The folks in the gas stops and cafes are uniformly nice and respond when you “hello” them.

I have a list of things to do after each of these trips and one of the things on this trip’s list is to figure out how and why Virginia ended up with the index finger. Looking at the map, it makes no sense, but own it they do and that’s where I ended up. I wanted to visit a relative — she is the daughter of my maternal grandmother’s cousin, so I don’t know what that makes her to me, but we share a lineal blood line of the same family from northern Arkansas/southern Oklahoma and there aren’t many of us left, so it is important. To me. She lives around the Onancock area and I was thrilled to meet her and have a nice visit. After our chat, I backtracked up to Chincoteague/Assateague to visit the National Seashore there. Assateague is a barrier island that is basically the first knuckle of the index finger — Maryland owns the north part, Virginia the south part. I was on the VIrginia part. 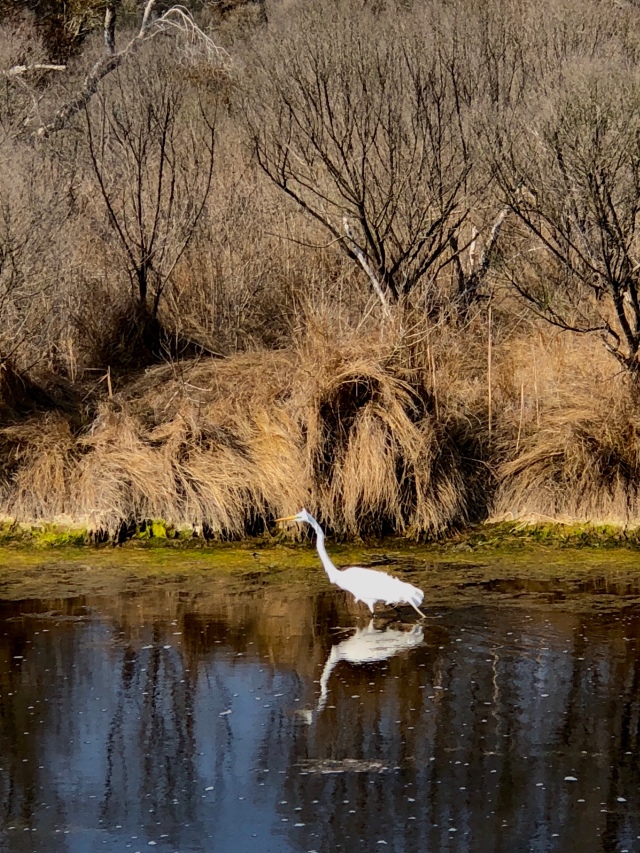 There is no permanent population of people on Assateague. It is all preserved for wildlife and the coastal forest habitat. It’s moving north a little bit each year because of a set of jetties that were built to maintain navigation for Ocean City Maryland. At its current rate of movement I’m not sure anyone is going to notice for a few million years, but still, we messed with Mother Nature, so I’m worried about the results. For now, it is a sublime place. You have probably heard about it because of the ponies. Either a group of Spanish horses swam ashore after their ship wrecked nearby (they have found a wreck, so this is plausible), or they are descended from colonial horses that were roaming free and got away from their owners. Either way, they are a unique genetic line. At less than 14-point-something hands high at the shoulder, they are by stature, ponies. But they have the genetic markings of horses, so some believe their small size is an adaptation to the environment. Regardless, they are the charming ambassadors for this windswept paradise on the eastern edge of the eastern edge. The herd is divided between the Maryland end and the Virginia end. A fence prevents cross-breeding. The Virginia ponies are owned by the Chincoteague Volunteer Fire Department. How this happened is a mystery, but it is one of the better pieces of data I’ve come across on the edge. The Maryland herd is owned by the state. Once a year, the firemen round up the Virginia ponies and swim them across the channel to Chincoteague where some are auctioned off. This benefits the fire department and provides the necessary control of the wild herd so they don’t overrun the resources of the island. The Maryland side just sterilizes a few of the mares each year to accomplish the same thing. You can decide which method you think is better.

While the Virginia ponies can go pretty much where they want on their end of the island, they generally stay on the western side in a salt marsh where they have their preferred feed of salt marsh grass. Because of the salt content, they drink about twice as much as a normal pony their size would. So they are fat. Bloated belly fat. And adorable. I hiked a trail around the salt marsh for a couple of miles and finally found a few of them. Enjoying a hike on this beautiful island, finding these iconic ponies, and spotting deer, more birds than I could count, and squirrels so old they look like Santa Claus, was an example of why I love this whole exercise so much. If you get a chance to visit Assateague, please do. It’s accessible and remarkable.

Tomorrow I will poke south over and under the Chesapeake Bay, and follow the coastline of Virginia down and out onto the Outer Banks of North Carolina. I’ve been there before with my son, and I hope to camp in the same spot. It’s been a long ride already from Cleveland around the top of Maine, and I think a night under the stars by the sea will do me good.

One thought on “A Changing Edge”