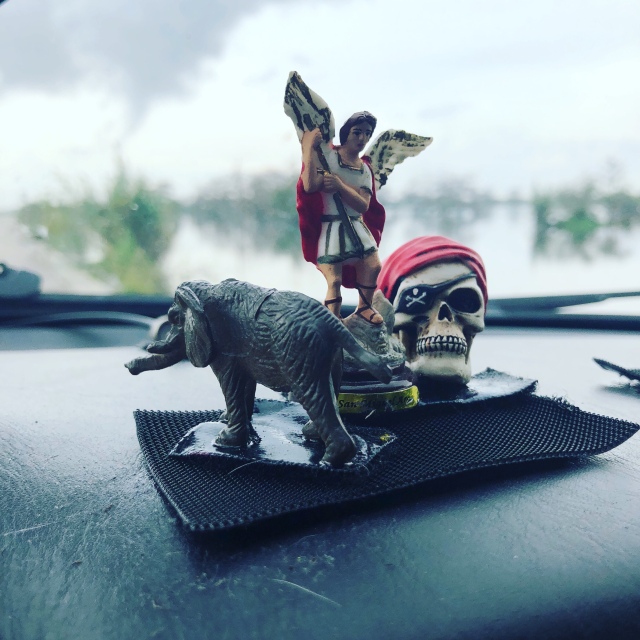 I slipped out of Long Beach, Mississippi under the early slate colored sky, the Gulf on my left at dead low tide, peaceful and flat, unable to generate a reflection from the sunless sky. Long Beach and neighboring Pass Christian are stately sort of towns (at least along the edge of the Gulf — I didn’t go into the main streets). The oaks are huge and sprawling, the homes are large, old and set back from the road. From their balconies and widow’s walks the view across the Gulf is broad and long.

Crossing Saint Louis Bay into Bay Saint Louis (I know, I though the flip flop of the names was odd too) the fog was thick and clinging to the surface of the bay like a lost child. It really never went away today — it lifted a few feet, thinned and then returned. I made my way across the marshy end of Mississippi and across the Pearl Rivers — first East Pearl, then West Pearl, and into Louisiana. THe edge here is so ragged, it gets hard to tell which side is which — there is water everywhere. Across on the old HWY90 through the Bayou Sauvage National Wildlife Refuge, around New Orleans and south toward Bell Chasse and, eventually, Venice. The end of the lap.

I’m reprinting this portion of the drive from my first day on the edge. I found the place as I left it, and I like the symmetry of ending with my words from the beginning. I will have another, final post, to try and sum it all up, but for the next couple of days, I am going to enjoy New Orleans with my wife. The greatest woman alive.

Portion of the entry from the day I first reached the edge:

New Orleans is always great.  Made more so these days by the presence of my son. It doesn’t need any shine on it and its blemishes are its charm.  Without pretense, it sits in the curve of the Mississippi and offers up its history, beauty, awfulness and soul willingly, in an example for us all. It is easy indeed.West and south of the city, across the river and along its final miles is a different story.

Unlike the easy spread of the Tennsaw and Mobile rivers, here our Country’s greatest River is terrifying, tense and hard at work.  Just past Belle Chase, with the heavy ships working a few hundred yards to my left, alarmingly floating above the level of my head, I realized this final stretch to expose the edge was going to be different.  I couldn’t relax.  Great industry, steel and smoke and holding tank and refinery rose as testament to the economic power of the mighty river, and dirt – soft, wet, porous earth piled into a levee of some engineer’s design – separated me from hundreds of millions of gallons of hydrolic force.  There are houses, trailers mostly, tucked against the levee and no matter the design, the normal-ness or the front yard mailbox flowers of any one of them, I was frightened at the notion of trying to sleep and eat and love and exist below the level of this much power. I’m sure they get used to it.  I’m sure it has some charms once you do get used to it. I can’t see them. All I can do is periodically remind myself to loosen my grip on the wheel, relax my shoulders and trust in the calculations that are keeping me from being underwater.

As if the river on the left isn’t enough, along about Buras, LA on the road south, you get the Gulf of Mexico pressing in on the right – again, at a level higher than your head. It is immediately apparent that while I may be driving to the edge, but for man, I would have arrived a long time ago.  In the interest of commerce, we have extended the edge through science and engineering.  And in doing so we created more country.  Without our determination, South Plaquemines Parish would be woody bayou and swampy delta at best, the straight up Gulf of Mexico more likely.  It’s a tense situation.

Plaquemines High School is as nice a facility as I’ve ever seen.  New, beautiful, and architecturally fascinating (it’s about 30 feet off the ground) it’s a testament what oil and gas money do for the home district.  The sign says “Home of the Hurricanes” which I suppose serves as both a mascot and a warning for the student body.  As I said, it’s a tense situation.

Before I left on this trip a fellow listened to me describe it and said “why in the Hell are you going to Venice, LA? It’s the end of the world and it isn’t a good ending.” Apparently his experience with an engineering crew down there 20 some years ago was not a good one.  The city itself is like some movie set of a post apocalyptic industrial world without any zoning laws  so I could kind of see his point.  If you were airlifted in here your first impression would likely include tears.  But here’s the thing: just south of the city, the levee ends and it’s like someone turned the oxygen back on. Peace.  Sure there is one last hulking refinery out there, but the river gets its rest.  It finally finds the edge and it is magnificent.  After ferrying and carrying and cashing and crashing and straining and draining every goddamn thing East of the Rockies and West of the Appalachians, the river is free.  So this is the edge.