Technically a rhumb line is a navigational term for a heading that crosses every longitudinal meridian at exactly the same angle relative to true north — so on the surface of the earth, it has a kind of spiral look to it. On a map, it looks like the shortest distance between two points. In a car, it looks like Interstate 20 from Atlanta to Big Spring Texas. Bags packed, geared stowed and secured, music selected, sunglasses adjusted, we headed west at 5 o’clock in the afternoon and we didn’t stop until we hit Carlsbad Cavern National Park 1,400 miles later.

Turns out the only part worse than the Texas Louisiana border at 4:30 am is the line for the elevator out of Carlsbad Cavern at 4:45 pm the same day (you can’t walk out after 4:30 pm, something we should have checked on). The cavern is impressive. It is big. It shows deftly the various cave formations (I think it shows all the cave formations anyone has bothered to define as distinct cave formations, but I lost track somewhere between “curtains” and “popcorn”. It should be a National Park — protected and valued and displayed. The problem is that it is very nearly a parody of itself. I would much prefer a peaceful walk through the above ground portion of the park — the Chihuahuan High Desert and Guadalupe Mountains where you can see the light bounce off some things and soak into others and create a depth and texture that is truly hypnotic — to the 60 second, 750 foot elevator ride to the beginning of the “Big Room” tour where you shuffle, shoulder, and otherwise brush against human forms clutching a recording to their ear in the semi-darkness as you trek a mile and a half around what can best be described as rat maze. The cave is a wonder, but how can I appreciate it with kids squealing and running — really, running, — through the walkways? And for your reflection time as you wait for an hour to go back up you will be visited by the mascot — a human dressed as a bat — for a cute photo. Seriously.

Thank God for Guadalupe Mountain National Park. The same geologic feature that enabled Carlsbad Disneyland, kept pushing up and south, punctuated by the rock that launched a thousand westerns, El Capitan. Guadalupe Mountains is quiet, beautiful, contrasting, awe-inspiring — all the things I want in a National Park, and no lines. It’s hard not to stop over and over to see the mountains (actually the exposed portion of “Captain’s reef” that poked out of the earth’s crust 270 million years ago) as the angles of light change. Then, just as you think you are saying goodbye to the mountains, you flop out into the great salt basin at their feet to the south and west and you get to see them all over again, and as new. 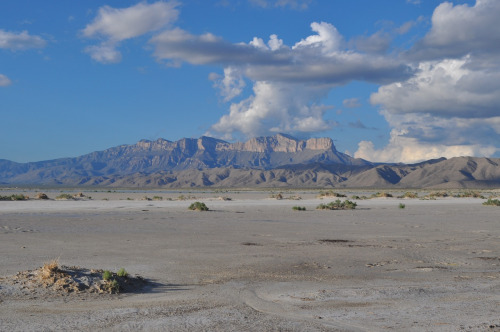 Rhumb lines can get you to a place, but once you are there, you have to wander. You have to get off course and do things you find out later you don’t like. You have to stop the schedule and invest more time in looking at the same thing again from a different angle. You can chart a course as precisely as you may, but stepping off the rhumb line along the way makes for good traveling.

Tomorrow we see the giant Saguaro Cacti in Arizona and continue west to Joshua Tree.