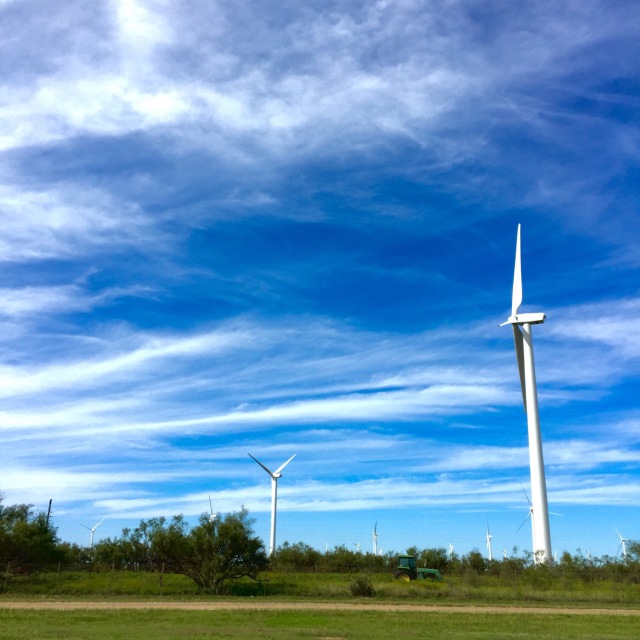 To get to the last spot I spent on the edge, I need to get to Pecos, Tx where I can turn south, and head down to the Rio Grande.  To get to Pecos, I have to cross a bunch of Texas.  Last night I stayed just east of the Louisiana/Texas border in West Monroe; so today was crossing Texas.

The thing about crossing Texas from East to West is that the “Big Texas” sneaks up on you.  Once you cross the Ouchita (oddly this is pronounced wash-i-tah) River in Louisiana, you are basically in the same sort of country you will be in until you get to Dallas.  You cross into Texas shortly after crossing the Red River in Shreveport and you are in what University of Texas geologists refer to as the Blackland Prairie.  It looks essentially the same as West Louisiana did ever since the Ouchita.  Other folks will tell you this is the “Piney Woods” of Texas, and by other folks I mean the late great George Jones, who I like better than the University of Texas, so Piney Woods it is.  Just East of Dallas, you enter, again this is UT stuff, the Grand Prairie.  What it feels like is that nothing really changes that much from West Monroe, LA to west of Fort Worth.  The geography is immediate, close at hand.  The flora certainly changes from mixed pine and hardwood, to mostly pine,  to scrub oak, but it never feels very far away.  Of course, the Dallas-Fort Worth metroplex is so damn big and busy you can’t tell prairie from arena-sized roadside church of the prosperous — of which there are MANY. (I’m not judging this particular evangelistic enterprise, merely pointing out that the buildings it requires are enormous. As for the faithful, the more better as far as I’m concerned.)

Then, you cross the Brazos River west of Fort Worth and things sort of spread out a little, but you’re still not feeling “Big Texas” until Eastland County — where you hit an abrupt geologic rift that runs north and south and rises maybe 300 feet.  When you top out Texas explodes before you and the sky wraps from corner to corner.  It feels like you get a big blue sky Texas hug.  Turns out the UT guys know this too.  This is the start of the North Central Plains (more or less) and it is BIG TEXAS.

Everything, as they say, is bigger in Texas, and in the North Central Plains the wind certainly is.  In fact, Nolan County, through which I passed and in which is the perhaps familiar town of Sweetwater, is home to all or part of 6 different wind farms comprising some 3,000 acres of wind turbines.  You see them from a long way off — I noticed them shortly after entering Eastland County, way off to the South and West on the caprock at the edge of the horizon. As I got closer, I noticed something else — hawks. Or raptors at least, some may have been kites, or other types. I notice hawks along the road when I drive.  It’s a holdover from being in the back seat as a kid and hearing my father say what I thought was “look at that hog in the tree there” and actually believing there was a pig in a tree that I couldn’t see.  For a long time I attributed this to the eye problem I was born with — not to a misleading father or, as was the case, a misunderstood word.  I remember when I realized he was saying “hawk” and not “hog” and I actually saw the hawk.  It was like winning the lottery.  So now I see hawks when I’m driving the road all the time.  Anyway, I’ve seen what I consider a normal number of hawks on this trip and then I get to the Eastern edge of the wind farms — where the turbines are high on the caprock — and there are hawks everywhere.  I count over a dozen in a one mile stretch.  Flying, sitting on wires, hovering over roadside ditches.  This starts me wondering.  Like the word went out among the raptors that the old hunting grounds on the caprock were a no go these days.  And so all the birds were hunting the flat ground around the highway.  Like they know.

First off, I am in favor of wind power.  I like a diversified energy portfolio — wind, solar, nuclear, bio, coal, gas, water, oil — I’m for all of it.  I’m not in favor of subsidies to get it. I think the market should do that so we know it is a sustainable proposition and we don’t end up getting real clean but real expensive energy which hurts poor folks disproportionately. So none of this is about not having wind power.  We should have it if the market will support it.  Anyway, it turns out that wind turbines are hell on birds — raptors in particular.  Estimates vary, but if we us the US government numbers as many as 328,000 are killed every year by turbines and that number is projected to grow to 1.4 million by 2030.  Bird lovers think this estimate is off by a factor of more than 10 — and they have some basis for this, using studies from Spain and Sweden and extrapolating.  These bird deaths happen because the turbines, which look lazy in the breeze, are really turning pretty fast — over 100mph at the tip of the blade — and the birds misjudge this and get whacked.  So I’m thinking the hawks in the middle of one of North America’s largest wind farms areas have sorted this out and are hanging around the relative safety of the highway instead.

West of Sweetwater the cap rack plays out and the turbines are all over the place at road level.  Much to my consternation, they are also in what appears to be totally random sites — they look a mess all over the landscape with no rhyme or reason.  I’m certain the smart guys mapped the wind currents precisely and placed the turbines accordingly; but since we can’t see wind currents and we can see turbines, they look helter skelter.  It’s offensive to the eye even if you appreciate some post modern, stark beauty in the turbines themselves. It’s like a crooked picture on the wall.  And the hawks are gone.  So, in a completely non-scientific observation that no one cares about, I’m saying the raptors of central Texas have figured out the turbine killing machines and are staying away when they can.

This held my normally short attention span for a good while on the road.  By the time you get to Colorado City, the wind farms have played out, you are high on the North Central Plains and the mesquite has completely replaced the scrub oak.  It looks western.  It is also near the point at which I turn south.  Tomorrow I will hit Pecos and then turn south to spend the morning at Balmorhea before proceeding through Alpine, Tx to the western gate of Big Bend, where I will camp on the Rio Grande.  Finally, on the edge again.