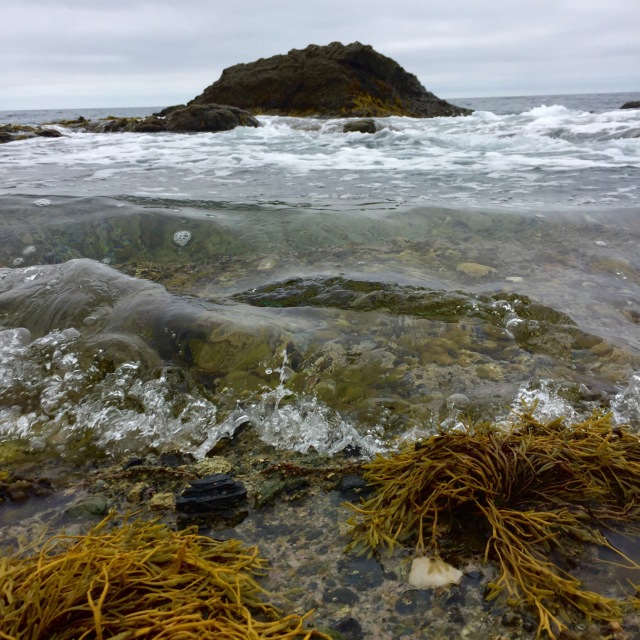 We bid farewell to the western edge under a thin marine layer of clouds and cool morning temperatures.  After a walk on the beach and a great breakfast at the incomparable Montage Laguna Beach, I dropped Leah off at the airport in Santa Ana and headed Northeast for Barstow.  For the first time in 15 days, I am heading east.  At Barstow, I pick up the origin (or terminus, depending on your perspective) of Interstate 40.  A sign points out that if I stay in my lane for another 2,500 or so miles, I will arrive at Wilmington, NC.  My plan is not to take I-40, but rather to find the Mother Road, Route 66 and use it for as much of my trip east as possible.  There is not a lot of thought to this — basically, I figured if I rode the hemline west, I should ride the waistband east, on the oldest route possible.  Should be interesting I figure.

So I dump I-40 at Daggett, CA and pick up Route 66 –the Mother Road.  Whatever.  I’m not as emotional about it as some, but here is a brief rundown: in 1857 Lt. Edward Beale was tasked by the War Department with building a wagon road on the 35th parallel and also testing camels as pack animals in the southwest desert.  Some portion of old Lt. Beale’s wagon road became what is now Route 66.  Some portion of his camels’ progeny are still wandering around southern Arizona.  Commissioned in 1926, Route 66 became the first fully paved US highway in 1938, and covered 2,448 miles from Chicago to Santa Monica.  Used primarily because it was mostly flat (Lt. Beale wasn’t big on taxing his teams up hills) it served the Sooners and Arkies and various dustbowl de-campers as a way out of trouble and into promise.  Wartime industry and post-war sun seeking (and fortune seeking) fueled further traffic, and 50s and 60s family traveling completed the demands on this old ribbon of tarmac ferrying westward the minions of fortune and fun.  Here’s my view: as a means of moving east and west, it’s not very good; as a means of travelingeast and west, it is exceptional.

It’s not, however, without its issues.  From Daggett to Ludlow, you are subject to the vagaries of old aggregate road construction and 10,000 year old Mojave lava, the resulting interaction of which renders the road nigh impassable.  The preferred solution is to slow down, and crank up the playlist from Desert Trip.  But I wouldn’t recommend this section for anyone in a regular car.  Between Ludlow and Amboy, you realize what all the fuss is about.  The Amboy crater is a 10,000 year old cinder cone volcano that splashed a 27 square mile lava field around before it spewed its last and went dormant.  That lava and the road tarmac and the heat soaking in the black lava and the geological stuff that I don’t know about, heave and push and sweat and swell and ultimately turn the road into a shitshow of huge sections that just lift away along side tire-shredding texture that roars in your ears like a jet engine.  Fortunately for me, the spewing seems to have been westwardly focused, so I finally get a little smooth road as I roll through Goffs and the southern edge of the Mojave National Preserve on my way to Needles and the Arizona border.

For a good deal of this section, there appears to be an old railroad bed adjacent to the road on the north side.  On the sides of the berm created for the railbed, people have arranged stones to identify themselves, profess their love, or otherwise mark the spot.  It’s like mosaic stone graffiti.  I stop to check it out, and find an old hobo campfire where none of the beer cans were up to code (they had pull tabs for God’s sake).  I pick up a an old bottle of “Bubble Up” cola, which was created in 1919 in Ohio and was Sprite for Coca-Cola before they stole it and made Sprite.  So, I think the stone graffiti has been her for a while.  It’s cool and I wish it were the normal way of marking our presence.  I can’t find enough spare rocks to mark my own name without stealing someone else’s, so I just take a picture and move along. 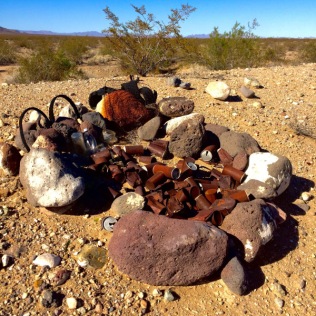 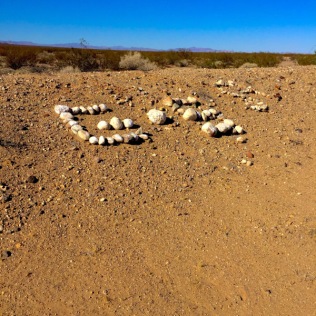 I lose the Mother Road at Needles, CA, though the local Chamber of Commerce would not be happy to hear this.  Try as they might to point my way, it is impossible to keep track of US Route 66 and US Route 95 amidst the preening RV Parks and Lake Havasu Catfish warblers.  I punt and grab a section of I-40 to get across the Colorado River into Arizona.  It’s a beautiful river here; not yet dammed to form Lake Havasu, and not yet pierced for the Imperial Valley agriculture syndicate.  I take the first exit on the Arizona side to regain Route 66, which is called the Topock-Oatman road here. 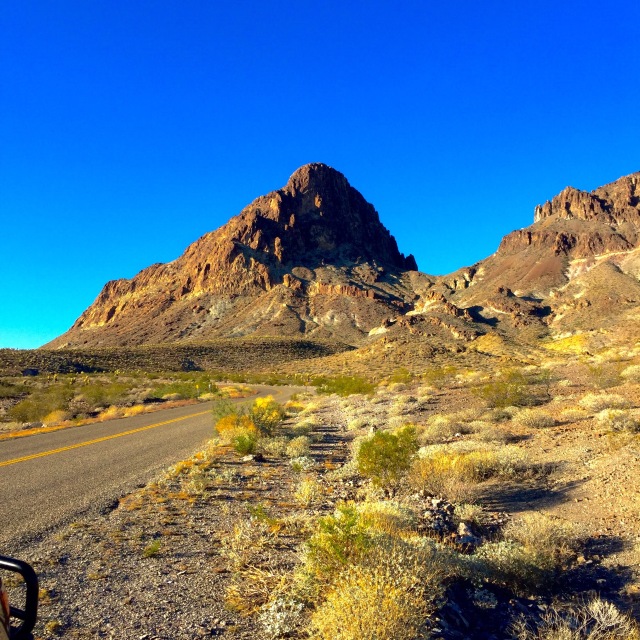 So the Route 66 east thing is more of a grail quest than anything.  It sounded great when I conceived it, but in the end it doesn’t really mean anything.  But like so many of Arthur’s knights, by God I’m going to finish it.  I don’t recommend it, or claim it as any sort of special accomplishment.  But, this section from Topock to Oatman to Kingman is a reason to stop anything you are doing in the area and take the Mother Road.  I’ve travelled a fair bit, and driven a few more than most scenic roads.  From Oatman to Kingman is top 3.  Seriously.  Up to, over and through a pass in the Black mountains, the road illustrates the work of a surveyor on foot.  It winds and climbs and twists and begs for a route through.  There are hairpins that should be marked K-turns; there are descents that should require parachutes; and, there are vistas that should require pacemakers.  It is breathtaking, awe inspiring, fill-in-the-blank-with-your-awesome-adjective-here. After a sign warning of wild burros in the road, I have one walk up to the door of the car in Oatman.  A wild ass on the Mother Road — sounds like a book title. 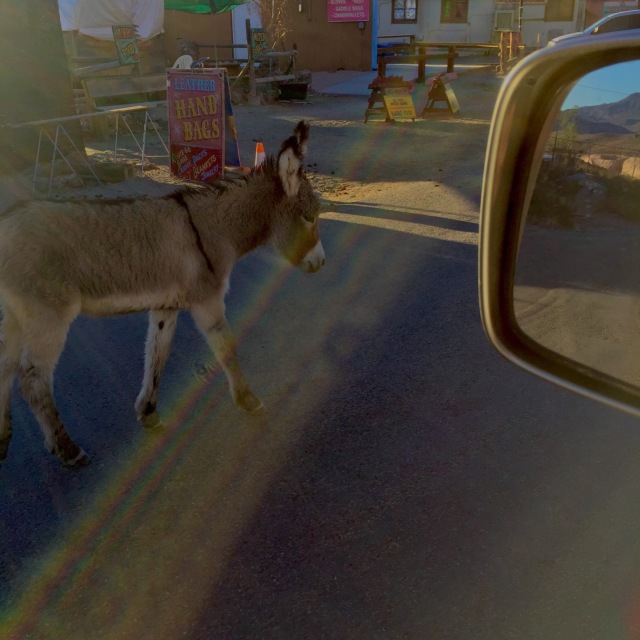 By the time I reach Kingman, I am beginning to think the Mother Road thing is worth it.  And maybe I will decide it is.  Arizona boasts the “most continuous miles” of Route 66; New Mexico, the “most miles” of Route 66.  I basically have all that to go tomorrow to help me decide whether to stick with it all the way to Oklahoma City.  I can get home faster.  Just depends on whether I want to move or travel.  For now, I travel. 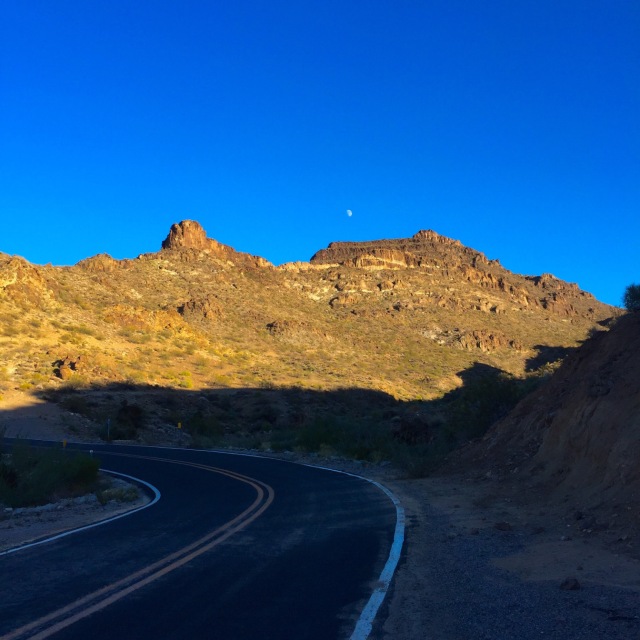