Cold and clear with very little wind was a great way to start the day on the edge in northern Vermont. Through Derby Line and Morgan Center, over to Wallace Pond, and finally to Canaan on the New Hampshire border. Technically I think I was east of the Green Mountain range, but there are several 3,000+ foot peaks in the northeast corner of the little club-shaped state of Vermont. It is a beautiful part of the edge with nothing more than some Canadian Flags on the storefronts and a few French language signs to give you any indication that you are anywhere other than America. The little towns are nice little towns, and the in between is a series of well framed vistas with lakes (all frozen), streams, and mountains joining the maple and birch forests in the composition.

At the New Hampshire border, I had a choice to make. The very northern edge of the state juts up above the 49th parallel in a little bubble of three lakes — Francis, and First and Second Connecticut lakes. But there is no road around the edge, just one that splits the middle and goes into Canada. So, I could drive up, see the lakes and drive back, or I could cut the tip of the state off and cross the White Mountains through Dixville Notch and then climb back north in Maine. I chose the latter; down to Colebrook, across to Dixville Notch and Errol, and then up on HWY 16 into Maine. Dixville Notch is famous for being the first votes cast in the first in the nation presidential primary every four years. The town is not a big deal, but I did love recognizing the source of the name. Just west of the town, you arrive at what looks like a wall of mountain, with Dixville and Kelsey peaks over 3,500 feet. Then you see the notch — a broken granite gap that can’t be anything other than a “notch” and the corresponding slot through the mountains. Out west they call these “passes” but when they look like this, they have be “notches.” I liked the little bit of New Hampshire I was in. The scenery is postcard perfect with mountains and forest complementing each other. Also, the gas station chat when I stopped for coffee was pleasant and the old guy was interesting. He asked what I was doing there and I gave him the short version of the Edge Trek and said I was headed over to Maine and up to the northern edge there. “Oh,” he said, “that’s a long way. Maine’s a big state.” I said he should see Texas. “Oh,” he said, “it’s bigger than Maine?” I said just a little. Maine is the 41st largest state in the US, but when you’re New Hampshire… 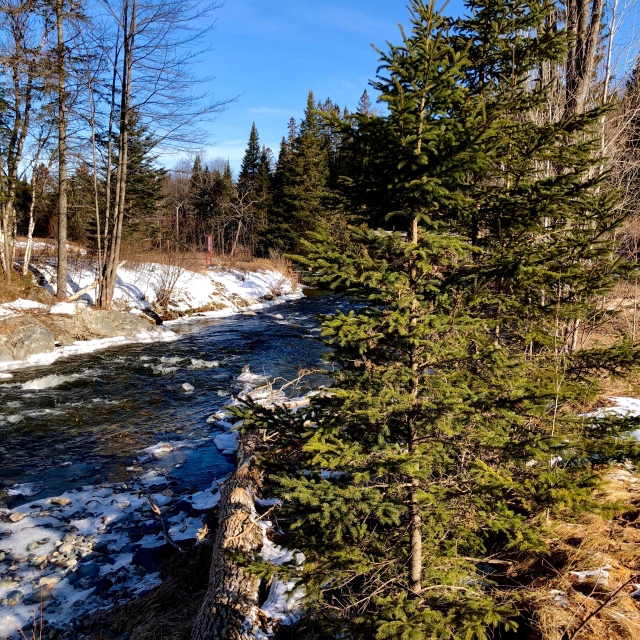 I have mixed emotions about my Maine experience. In terms of the goal of the Edge Trek — it has so far been a failure. There is a substantial edge from the northeastern corner of New Hampshire to the northern border of Maine. All of that border is within the 3.5 million acres of the north Maine woods with no towns and no paved roads – save the small stretch of US 201 that goes west/northwest into Canada. The area is managed by a loose coalition of private timber and state timber interests and it has roads — just not paved ones. And not well marked ones. And not well maintained ones. And not plowed in the winter ones. Determined to get as close as I could, I came east into the Rangeley Lakes area, north into Eustis/Stratton, around the lakes south to North Anson, and then back north all the way to Jackman. From there I went east to Moosehead Lake and Rockwood, and south around the lake to Greenville before turning north again up the Lily Bay road. If you look at all this on a map it looks crazy, but what I was doing was probing for logging roads I could use to get to the edge. The maps I have were pretty good and I could generally find the entrance to the roads, but they were un-plowed and blocked by the snow bank from the main road plowing. By the time I got to Rockwood, on the western side of Moosehead Lake, I realized I wasn’t going to get to the western edge of Maine. But I thought I could get across to Millinocket without going further south — and this would allow me a direct route to the northern edge in the morning. On the eastern side of Moosehead Lake, the Lily Bay road runs north all the way up to the southeastern corner of Baxter State Park where the Golden Road goes east to Millinocket. These are through Plum Creek Timber company land and were reported to be plowed and open. I made it about 8 miles north of Kokadjo, chose the eastern fork (unmarked) of what I believe was Lily Bay road and followed the two track slush in the general direction of north and east. This was a two track, not a plowed logging road. Eventually, the snow was drifted too deep to continue and so I reversed back to a wide spot and turned around. Then I went 60 miles south to Guilford, across to Milo, and back north to Millinocket. I found the terminus of the Golden Road outside Millinocket and it was beautifully plowed. I just never found the other end.

If you are gathering a tone of frustration, you’re comprehension is on point. I really thought I could figure this out and make it through. I want to be mad about it, but I can’t. In the end it is astounding that in 2018 there is a portion of the border of the United States that, at least at this time of year, you can not get to unless you go to Canada and come from that side. And I think I mean astounding in a good way. Like, you have to park it and saddle it and brave it to see it. By the way, the north woods are rumored to have all sorts of mythical creatures in them, including squirrel-like creatures that drop poisonous moss in your eyes at night. So, while frustrated, I will simply head north, along the eastern edge of the north woods, all the way to Fort Kent, round the top and then head south along the Atlantic. I’m looking forward to the lonely ride through the middle of the state and intend to keep my eyes well protected.

I should talk a little about what it is like traveling in this part of Maine. It’s beautiful and unspoiled. And it’s like a tunnel. The roads are rough, narrow and tightly bordered by dark green, almost black, evergreens. As a result, you rarely get a sense of anything except what is directly ahead. There is wildlife — I counted turkey, deer and a fox (or marten I’m not sure) in today’s roster and I’m going to be disappointed if I don’t see a moose tomorrow — but it is only in front of you. Every once in a while, you top a rise, maybe near a clear cut, and you see the northern end of the Appalachian Range — chiefly Mt. Katahdin — but it is gone in a flash, replaced by the dark tunnel of softwood. It is difficult to describe the density of the forest of here — my only comparison is the western slope of the Amazon Rain Forest in Ecuador. If you step into the forest here — maybe 20 feet or so, and turn around three times, you’d be lost. It is very much like a wall on either side of the road. The result is a real sense of isolation. I’ve been in very remote places out west — miles away from anyone or anything — and it didn’t feel as isolated as that two track in the north Maine woods. I would like to think that if I’d stopped and just chilled out a little bit before hammering it in reverse, I would have found Frost’s sense of the “lovely, dark and deep” woods. I might have. They were lovely and dark and deep. But they were also in the way. I’m going to try and be more accepting tomorrow. And I’m going to get to the edge.