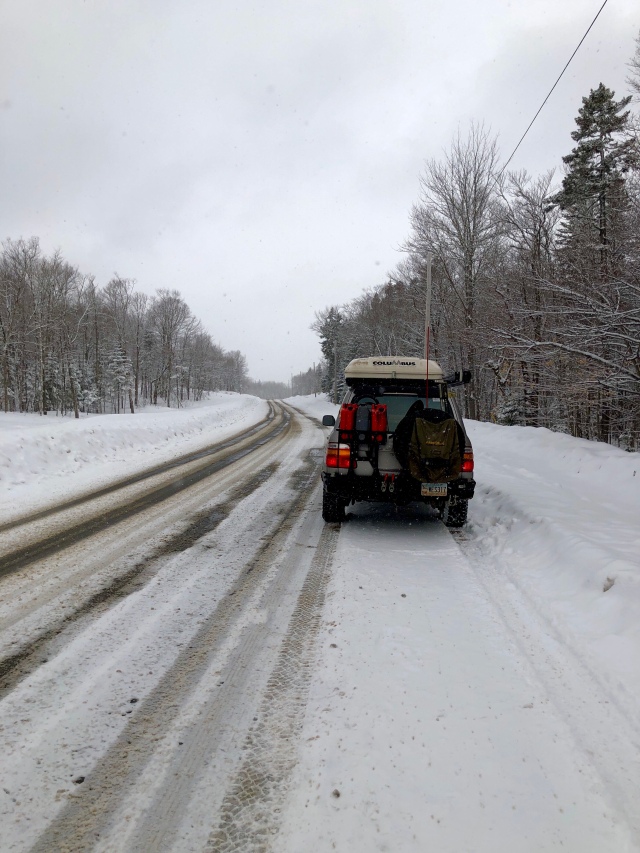 A pause on the Arastook Wilderness Road in April. This was the drive all the way up.

What a day. Every time I’ve been out on one of the segments of this Edge Trek, whenever I have a frustrating day, it’s almost always followed by a very fulfilling one. Such was the case today. After a wander about yesterday, my mission today was to get to the northern edge, turn the corner and begin the long southern trip down the Atlantic Coast. Before I get to that, a confession: I grossly misread the weather for this part of the trip. Which is to say, I studied the forecast during planning, checked them again before leaving, and believed them. I am comforted somewhat but the fact that everyone up here seems completely surprised by it as well. I had visions of catching smallmouth and brook trout in the waters of northern Maine — waters that are frozen. I was planning for cool nights, maybe around Mt. Katahdin and somewhere in the Green Mountains of New Hampshire — nights that turned from 30s to single digits coupled with an historic windstorm including gusts of 65mph where I was and over 100mph in Central Maine. What I’m getting at is I woke up with 3 inches of new snow and more falling, and I drove right into the teeth of it. It didn’t matter one bit.

Maine has 17.5 million acres of forest land. That is almost 90% of the surface area of the state, and includes almost 25 billion live trees. Certainly there are states with more trees, but I don’t know of any that are more completely forested. This is relevant because that completeness, the sheer un-ending nature of this biomass, has a real effect on you. No individual tree is interesting — they are various spruce and birch and maple mostly — but the whole of them, dense and together for every inch of the ground is almost overwhelming. I left this morning and basically followed the eastern edge of the Allagash Wilderness/North Maine Woods all the way to the top of the state. There is only one road, so nothing to do but get on the Arastook Wilderness Scenic Highway and head north.

The snow kept things quiet, and the deep green Spruce provided a nice canvas for the white accents. The road was fine, if a little vague beneath the covering. It got progressively heavier as I got further north, and by the time I got to the top there was about 6 inches of new snow. On top of the two and half feet already on the ground. So with two hours of zen-inducing straight line between the constant forest I had a very relaxing first couple of hours. Everything to my left (west) all the way to the New Hampshire line represented the least densely populated area east of the Mississippi, and everything to my right (east) was completely hidden (and not very populated either). So it was hard to be tense about anything.

Fort Kent has a fort because of some tension back in 1838-39. There are three Maritime provinces of Canada — New Brunswick, Prince Edward Island, and Nova Scotia. They considered themselves largely independent and were settled by Acadians — Frenchmen, Basque, Native American mixes who were tough, proud settlers. They refused to fight for the British or the French in the French and Indian War (Seven Years War). Somewhere in the St. John’s River valley a British officer captured some French soldiers and believed an Acadian with them was fighting for the French. And thus began a period of attempted eradication of the Acadians from the territory at which most progress was made after the Revolutionary War when loyalist British moved north and wanted land. Acadians were pushed into servitude in several places across the globe. Including Spain, with which they returned to America and helped settle Louisiana. Many also ended up on the western banks of the St. John in what was then Massachusetts. In 1820, when Maine became a state, the governor was very keen to have a good census and clear borders as he and his pals went to work making money. The British were keen to sneak back some of the land they ceded in the Treaty of Ghent, which re-instated the 1773 borders between Canada and Maine (Massachusetts). If you look at a map and go east from Montreal to New Brunswick you will see why they wanted it back. Anyway, lumberjacks were cutting timber where they pleased, politicians were squabbling, Maine called a special census of its own and authorized money for surveying and — for raising the state’s defenses. And the Acadians wanted nothing to do with the British. Things were getting pretty sticky with state militia massing at the border and by 1839, the parents got involved and settled it all with another treaty — signed in 1842. The result is that the St. John’s river is the border until the valley plays out at Hamlin, Maine, and then on a straight line south to the Monument River and through the middle of various lakes until the St. Croix River and from there to the sea. And the Arastook War fort at Fort Kent. And the fabulous Acadian culture of most of northeastern Maine.

Mid-way between Fort Kent and Calais, I visited Al’s Diner in Mars Hill. It is everything that is great about diners. Solid food, a friendly, talkative proprietress, and a great crowd of patrons. The accents were very different but the spirit was familiar if you’ve ever been to a crawfish boil in Louisiana, or a bar in New Orleans. One table as a guy with his 97 year old mother on her day out from the home. He had his wife and sister with him and they all doted on “Mom.” Another table was in deep discussion about a particular Catholic priests view of the transfiguration. Another was a steady weather report back and forth with the kitchen. (Mars Hill had 16 inches of snow this week.). It was delightful. On the way out I talked to the owner about the town and her business. She said all winter the place is packed every weekend with snow mobile riders who come from all over, and snow sledders who come from as far as Pennsylvania. She said 85% of her business comes from visitors. We love our regulars she said, but we don’t count on them to make money. She had the natural hospitality, visiting each table, that I haven’t seen since, well, New Orleans.

I started this whole trek with the great Acadian culture of southern Louisiana and never in my wildest dreams did I expect to find it’s bookend in the northeast corner of Maine. This is why it continues to be such a joy to be on this journey. I’m in Calais tonight, where the St. Croix finds the sea and the Atlantic coast of America starts. I’m on essentially the same road I will be on all the way to Key West, Florida — US 1. I will peel off for the outer banks and one or two other places, but the “1” it is for a long while. Tomorrow I go to Acadia National Park and see what is available this time of year. I’m looking forward to the scenic coastline and a different set of images, but I will not soon forget the dark, dense woods of western and central Maine.

2 thoughts on “Another Corner on the Edge”