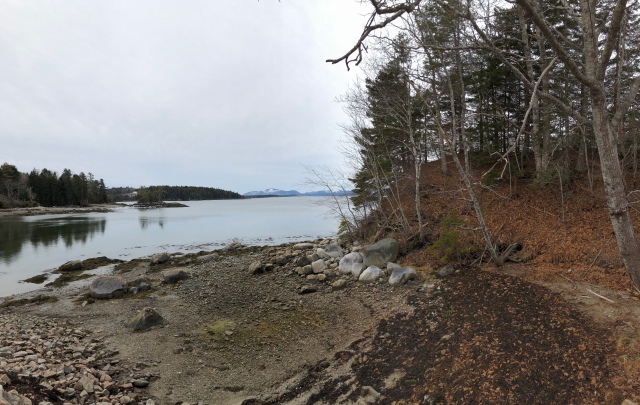 Cadillac Mountain in the distance

Once out to the mouth of the St. Croix river I turned south down the Atlantic coast of the United States. That starts with the rocky, uneven, dramatic coastline of Maine. All of this started more than 600 million years ago. After numerous shiftings, meltings, upheaving, burying, eroding and other stuff over a period of 200 million years through geologic periods with funnier names than they deserve, came the Acadian Orogeny of the Early Devonian period about 400 million years ago. But you already knew that. What you might not know is that event — the Acadian Orogeny — was a mountains building event. It created the Boundary Mountains of Maine and the Appalachian Mountain Range. We clambered through the last of the Appalachians in order to get to Calais yesterday, today we headed out to one of the more notable Boundary Mountains that remain poking up as islands off the coast — Cadillac Mountain, which rises from Mount Desert Island as part of Acadia National Park. Cadillac is one of a handful of mountains that are in the park, the highest, and is said to be the first place in the United States to see the sunrise.

Acadia National Park is the oldest park east of the Mississippi, which admittedly isn’t saying that much, and includes a history as a French missionary colony, and the active participation of one of the country’s greatest philanthropists in its restoration. Like much of the area up here it was caught up in the conflict between the French and British during the Seven Years War when it was ceded from French control to the British and the then governor and legislature granted land grants to the two children of the French explorer Cadillac who discovered it. Around the turn of the 20th century, the state of Maine began acquiring land and the largest portion was granted to the state by a woman in Boston who, I presume, was an heir to the Cadillac family. Having established the land for the public interest a fire burned nearly all of it in 1947. Led by John D. Rockefeller, Jr who personally laid out new carriage trails and oversaw design, the park was restored to its current state.

The park is remarkable, chiefly for those carriage trails, in my opinion. They are wide and maintain less than 10 percent grade, and are winding throughout the park. They make for marvelous walking. There is, of course, also the coastline. With the surf crashing at the base of the Boundary Mountains and great granite blocks breaking like tables along the shoreline, it is a dramatic site. The majority of the place was still closed for the season, but I was able to explore, and hike, and get a real sense of what this piece of land, 400 million years in the making has grown to be.

Carrying on south down the coast was as the postcards capture in terms of beauty. What they don’t capture is the rhythm of the place. Punctuating the rocky shoreline are estuaries and basins drawn nearly dry on the outgoing tide, their colorful boats laid over awaiting a fresh batch of nutrient-rich seawater on the ongoing one. Periodic deep harbors tuck in behind granite guardians and are surrounded by iconic villages with histories as rich as the waters themselves. All of it combined repeats and repeats and repeats in a rhythm that is hypnotic. From whaling to codding to scalloping and lobstering, these are all places of the sea as much as places of the land. 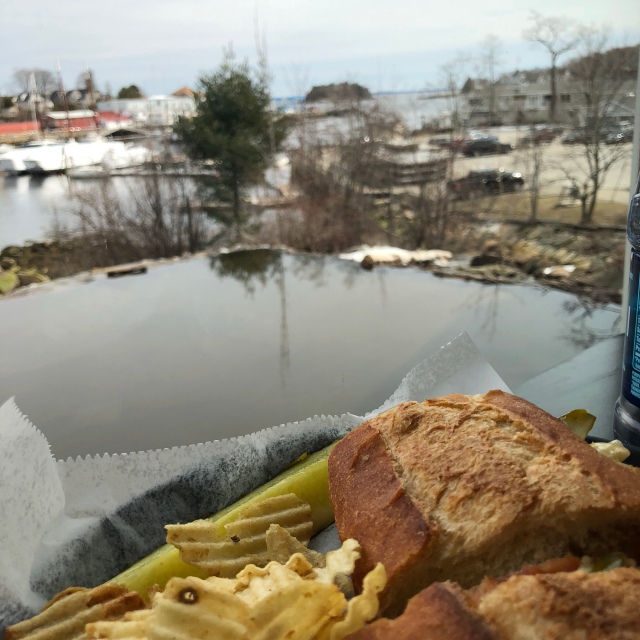 A bite of lunch overlooking the harbor at Camden

Just south of Camden comes Bath, and a hint of what is to come. It is a beautiful town, evenly divided, with churches and quaint village shops to the north of the bridge and a great sprawling ship works to the south bedecked in cranes and girders and dry docks. There is industry to be plied here on the edge. And it will continue to thicken, as will the population. By the time I get to Portland where I stop for the say, the corridor of development is in full swing. From here on, Portsmouth, Boston, New York, Philadelphia and Washington will pack the edge with people and power. The scenery won’t be bad, but it won’t be what it has been. Replacing it will be the history of first a foothold, and then a stranglehold on everything else that happens inside the edge. One relatively small stretch along the chain that defines our boundaries will contain more of how what happens within those boundaries than any other place on the edge.

It will be different for the next few days. No more wandering and imagining and relaxing. I will have to be hard on the wheel, fighting traffic and dealing with a landscape more man made and vertical than natural and sprawling. I’m not going to lie, I’m going to get through it as efficiently as I can — my target is Cape May, New Jersey, where, with a ferry ride to Lewes, Maryland, I will be back in the natural setting of the eastern shore with the outer banks to come. I’ll sleep tonight with horns honking in my head and do my best to hold onto the images of Maine as the roads thicken.

Stare at a rock and find your zen. Going to need this image over the next day or so