I suspect it will come as a surprise to none of you that I didn’t end up today where I thought I might.  But more on that later. First order of business is to make a recommendation.  I don’t do “favorites” on the edge, because, honestly, I’ve found redeeming qualities in almost every aspect of it, and this isn’t about pleasing me, it’s about making a trip around the country on the edge or as close as I can get, and seeing what I see.  That said, I do occasionally suggest you put a place on your list.  Today, I would add Porcupine Mountains Wilderness to that list, and the entire Copper Mountain Range area from Hancock, MI to Copper Harbor, MI.  These places are the reason I didn’t end up where I thought I might — they were so spectacular that I spent all my time in them. 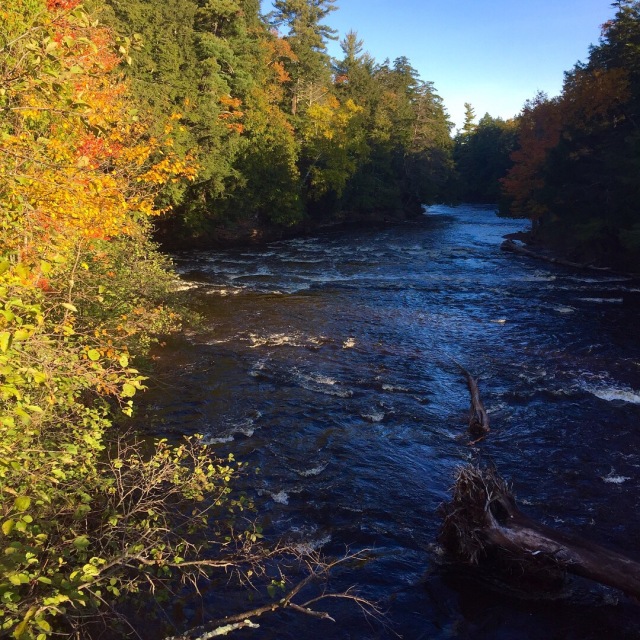 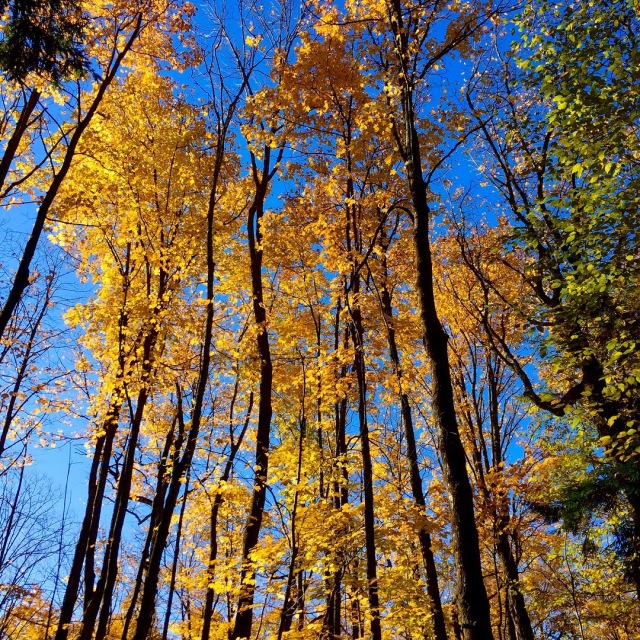 I left Wisconsin early because, you’ll recall, I had a plan to get to Grand Marais and I knew I was going to push it if I stuck to the edge. Almost as soon as I crossed into the UP of Michigan, I knew the plan was in jeopardy.  Everything got quieter in Michigan.  That’s a crazy thing to say, I know, but if you were with me, you’d know what I mean, and furthermore, that I’m right.  It did.  Also, variety appeared almost immediately among the forest species.  While the aspen and alder were still there, now there was oak and maple and larch and hickory and walnut and birch and basswood and hemlock. And the forest itself was healthier — gone was the tangle of underbrush and thicket, in was the open woodland with fern and moss.  And it got quieter.  By the time I got to the Porcupine Mountains Wilderness I was in love — once I got there I was like a middle aged woman on the front row of a Tom Jones concert, I was in lust.  Now, it is cheating to come here at this time of year. All those species of trees I mentioned earlier are painting a fall picture like the most amazing one you can imagine in your head right now — only better.  Inside the wilderness area you get all that, plus the structural issues of the forest I mentioned, plus the presence of mountains, plus the presences of beautiful little streams every few hundred yards.  My first plan was to just find a course through the wilderness that maximized my exposure to all this, but soon I had the truck parked and I was afoot, just wandering through the forest along stream beds, stopping to sit and listen, and basically being a goofy kid in love.  The whole of the wilderness is over 59,000 acres, but it has a continuous stand of hardwood spanning over 31,000 acres that makes it the largest old growth hardwood forest west of the Adirondacks.  I believe in all that.  And while the ranger will tell you ther are 87 miles of trails to hike, I will tell you it doesn’t matter.  You can just walk off any road or two track in the place and have a great time.  The forest is open and untangled. Your only obstacle may be one of the many streams, but I’d consider that a feature not a bug.  The Indians named the place because the mountains have the shape of a porcupine.  The basalt rock geology is full of copper, but none is mined here now.  This is a special place and one I will come back to once I’ve finished the edge.  To sit and to stay and to listen and to see.
When I finally crossed the the Porcupine Mountains, I was on the shore of Lake Superior again; which I followed dutifully north and east into the Copper Mountain Range out on the Keewenaw Peninsula to Copper Harbor and, as it turns out, beyond.  If you look on the map, you will see a funny little appendage sticking up out of the Upper Peninsula of Michigan — call it the really upper peninsula.  This is the Keewenaw — which is the Chippewa word for shortcut.  Seriously, the Chippewa figured out you could cut across the Upper Peninsula by water via a water route through lakes and rivers that divide the appendage between the now towns of Houghton and Hancock.  The Keewenaw is (was) rich in copper as a result of some crazy basalt spread out in the Pre-Cambrian period.  The key here is what you dig up, if you can do that, is pure copper.  Most copper is created from copper sulfides or oxides which are mined and refined.  The Keewenaw copper came out of the ground as copper.  Beginning in the mid 1800s companies began exploited the finds first made by the Chippewa, diggiing deep shaft mines because the copper tended to occur in vertical seams.  It was labor intensive.  Copper prices fell and the mines closed.  We went to war in WW1, copper prices rose and the mines re-opened.  We stopped being at war, prices stabilized and the industry consolidated.  This is a familiar story — I will cut to the chase.  By 1968, the mines were done.  Today you can get a tour underground if you are into that sort of thing, and the grand homes and Opera House of Calumet are there to look at, but there is no more copper coming out of the ground commercially.

This bothers me not in the slightest.  When you climb up onto othe mountain range at Hancock, the road turns east and north on the spine of the ridge and simply runs out to Lake Superior.  Falling away on both sides to the lake, the Copper Mountains are like an angry cat’s back — in this season a calico cat — coated with color and spiked with the rock that holds pure copper deep in its veins.  Like the Great Sequoias out west, there is no economic equation to get at the value of this resource — it is too expensive to get it out.  The benefit, of course, is an amazing piece of country that is essentially unmolested (the mines were vertical affairs and disturbed little) and stunningly beautiful. At the end of the highway, there is a little circle to turn you around and head you back off the Keewenaw the same way you came.  But there is also a dirt road heading further out to the tip of the peninsula.  I took that road.  I highly recommend it, if you have four wheel drive and a decent set of tires.  The road is atrocious, but not impassable for a stock vehicle.  And the ride, view and isolation are worth it.  You can drop down to see the Hurricane Harbor, or stay on it all the way to the High Rocks Harbor.  All of it represents more of this stunning landscape.


So, I turned three hours worth of driving time into a full day of parking and wandering and going places I didn’t even know were on the map.  Whatever.  The edge here is magnificent.  Everyone who is here is looking out to the lake, for their fortune, to load their wares, or just to see the stunning Gitchee Gumee.  They want to be here.  They aren’t worried about inland, they are worried about the weather. I loved every minute of it.  For tomorrow, I’m going to start the truck at around 7:30 and head out.  No promises beyond that.